Virginia's open container law is a commonly misunderstood law. Without fully understanding not only what the open container law prohibits and does not prohibit, but also other laws in VA that may apply to the exact same conduct, many people run the risk of being cited for an alcohol related crime, and even a DUI, while believing they are engaging in lawful behavior. 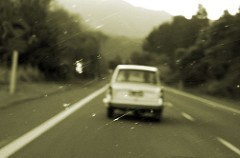 beverage while another person is driving. Not only may this behavior result in the driver being charged with a DUI, but it may also result in the passenger being cited for a violation of state law as well.

Many people also believe that transporting a resealed alcoholic beverage is perfectly legal, when in many cases it is illegal to do so, depending on the facts.

Virginia's open container law, § 18.2-323.1 of the VA Code, prohibits any person from consuming an alcoholic beverage while driving a motor vehicle on a public highway in Virginia.

At first glance, this would seem to indicate that if you are not the driver of the vehicle then you are allowed to drink in the car, even though the car is running and is being driven by another person.

It is Important to Keep in Mind a Number of Issues About This Statute:

"Highway" means the entire width between the boundary lines of every way or place open to the use of the public for purposes of vehicular travel in the Commonwealth, including the streets and alleys...

So in most cases a road that is open to the public will qualify as a public highway, even if the road in question is a side street or alley way.

It is important to understand that Virginia's open container law creates a rebuttable presumption that the driver has consumed an alcoholic beverage if:

(2) the alcoholic beverage in the open container has been at least partially removed, and

(3) the appearance, conduct, odor of alcohol, speech or other physical characteristic of the driver of the motor vehicle may be reasonably associated with the consumption of an alcoholic beverage.

So while the open container law does not specifically prohibit a passenger from drinking while another person is driving the vehicle, his actions very well may cause the driver to be charged with a DUI if pulled over by the police, even if he has had nothing to drink.

3) An open container does not have to actually be open

According to the statute an "open container" means any vessel containing an alcoholic beverage, except the originally sealed manufacturer's container.

Therefore, even if the alcoholic beverage has been resealed, once it has been opened, it is considered to be an open container. This would apply where someone re-corks a wine bottle, or puts the top back on a liquor bottle.

5) The passenger area is defined as:

It does not include:

So, if you have to transport a previously opened alcoholic beverage, in most cases the best place to store the beverage is in the trunk of the vehicle.

Even in situations where there are no other passengers in the car if there is a previously opened alcoholic beverage in the "passenger" area of the car, the driver may still be charged with a violation of the open container statute, or with a DUI, depending on the circumstances.

It is also important to understand that Virginia's open container law only prohibits certain behavior, i.e. a driver from drinking while driving (if the driver was drinking to the point of intoxication, he would of course be charged with DUI instead of with the violation of the open container law). It does not specifically grant a passenger the privilege of drinking while another person is driving a motor vehicle. This is important because another statute in Virginia prohibits drinking in any public place.

Virginia's drinking in public law, § 4.1-308, states that "If any person takes a drink of alcoholic beverages or offers a drink thereof to another, whether accepted or not, at or in any public place, he shall be guilty of a Class 4 misdemeanor."

Under § 4.1-100 "Public place" means any place, building, or conveyance to which the public has, or is permitted to have, access, including restaurants, soda fountains, hotel dining areas, lobbies and corridors of hotels, and any park, place of public resort or amusement, highway, street, lane, or sidewalk adjoining any highway, street, or lane."

Therefore, if the passenger is consuming alcohol on a highway, street, or lane he would be in violation of this statute.

I provide free initial consultations seven days per week, including all evenings, weekends, and holidays, from 8 AM to 6 PM. I charge by an agreed upon fixed fee, and provide prompt, virtually immediate, responses and answers. I concentrate my practice solely in the areas of Traffic Law, including DUI, Reckless Driving, Assault and Battery, Drug Crimes, Larceny, Firearm Crimes, and numerous other criminal offenses

Comments have been disabled.