Along with potential jail time, fines, and license suspensions, an increase in insurance rates is one of the main issues clients are concerned about when facing a reckless driving charge.

Virginia does not have a statutory insurance point system

Unlike some states, Virginia does not have an insurance point system. In some states, such as North Carolina, when a driver is convicted of a moving violation he will receive a corresponding number of points set by the state legislature for that violation. The number of points has a correlating percentage increase in insurance premiums. For instance a violation that is equal to 1 point may result in a 25% increase. Virginia 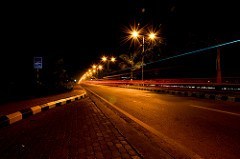 does not have this system.

Virginia does utilize a demerit point system, but this is separate from insurance points. Reckless driving in Virginia is a 6 point ticket, but this does not automatically result in a set increase in insurance rates for Virginia drivers. The 6 points are assessed against a driver's driving record and can be used to suspend a person's license if enough points are accrued, and is used for other purposes.

Insurance companies in VA have their own point system

Insurance companies take into account numerous factors when determining insurance rate increases. In Virginia, some insurance companies use their own point system to determine the premium increase for a driver, but this does not necessarily correspond to the points assessed on a driver's driving record as a result of a reckless driving conviction.

Many reckless driving cases involve traffic accidents. Some insurance carriers will increase the driver's insurance as a result of the accident, but will not apply an increase if the driver was not at fault or there were other circumstances such as emergency use, flying gravel, or an animal was involved in the accident. Some carriers will only increase the premium if the damage is in excess of a certain amount. If you are convicted of reckless driving this will indicate that you were at fault for the accident. If the driver was involved in multiple accidents during a certain period of time, this may result in a further increase.

Some insurance companies have accident forgiveness programs where they look to a variety of factors to waive a surcharge as a result of an accident. Some factors include the length of time a driver has been with the insurance company, length of good driving, and that the driver is older than 21 years of age.

Some insurance companies use a conviction point system to determine insurance premium increases. Reckless driving cases that involve injuries to other persons often are among the most heavily penalized crimes or traffic violations, similar to a DUI, and hit and run. Reckless driving cases that involve just speed, or that do not involve an injury to another person are often considered one level below DUI cases.

Another factor insurance companies consider is the experience level and age of the driver. Some companies automatically add 1 point simply because of age or lack of experience. Combined with a reckless driving ticket the increase will be greater than with an older driver.

Example of Reckless Driving Insurance Increases Based on Point System